The destructive nature of the Asian Gypsy Moth has prompted numerous countries within the Americas and Australasia, where the insect is not indigenous, to implement specific procedures to discourage and prevent entry into their fragile ecosystem.

The voracious appetite of AGM larvae (caterpillars) coupled with the ability of the female moth to travel significant distances (as much as 20 nautical miles) can cause widespread defoliation, leaving trees weakened and susceptible to disease and other pests.

The AGM is found primarily in Far Eastern countries, posing a high risk of egg infestation of vessels calling at ports in Korea, Northern China, the Russian Far East and Japan during the flight season of the female moth. 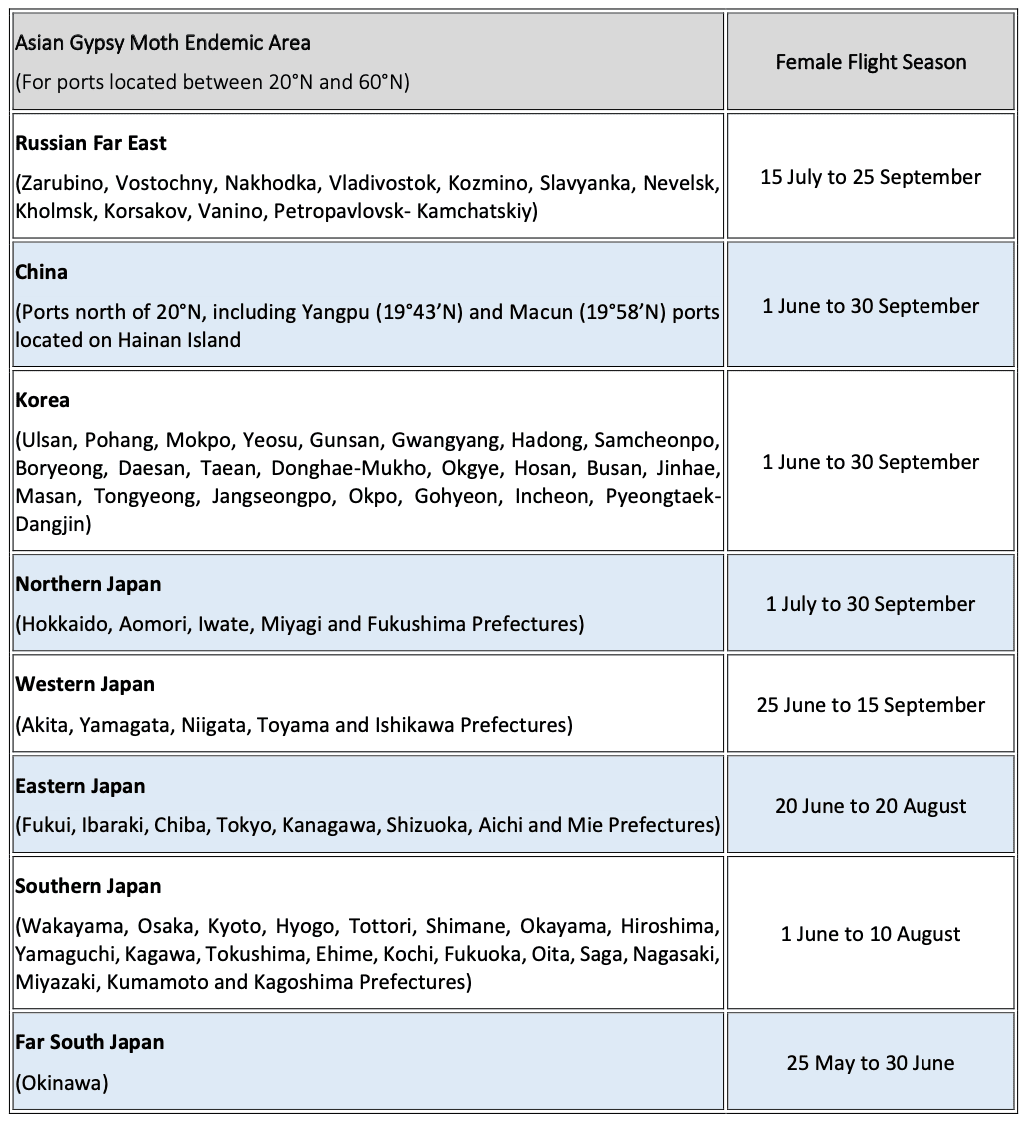 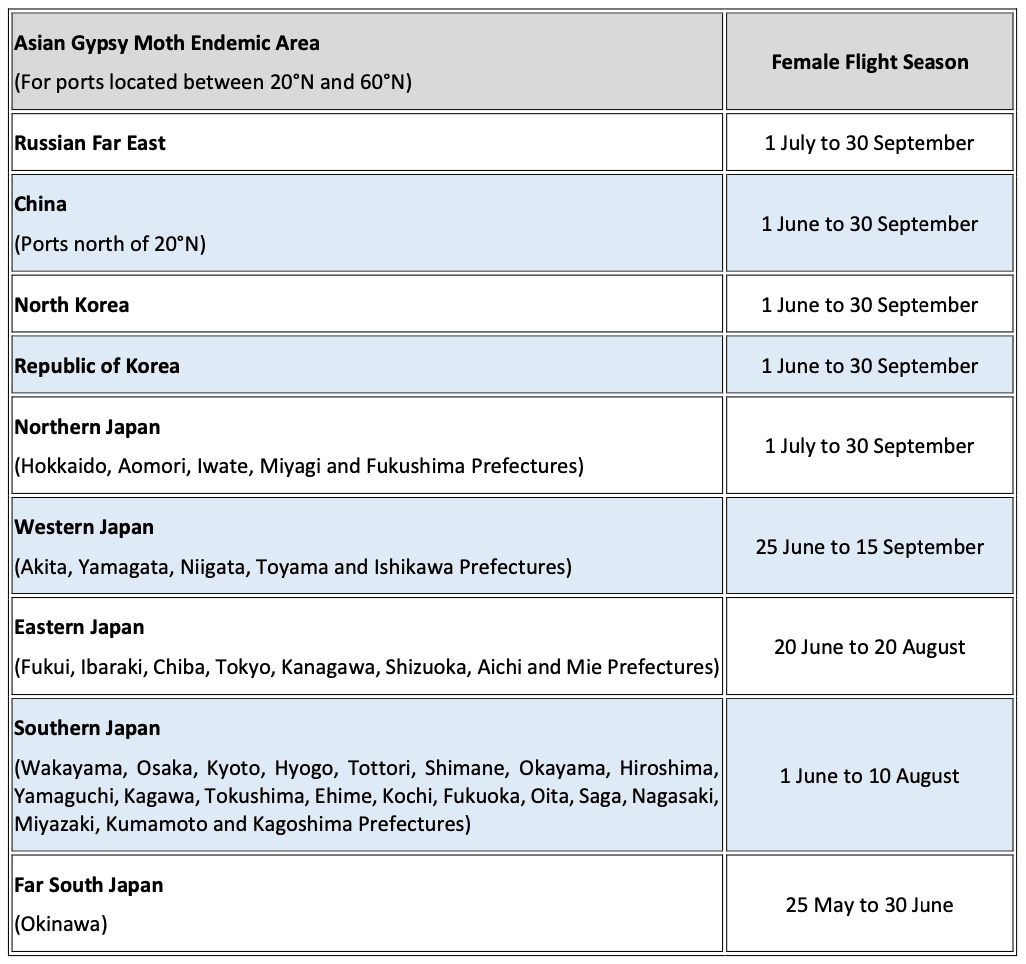 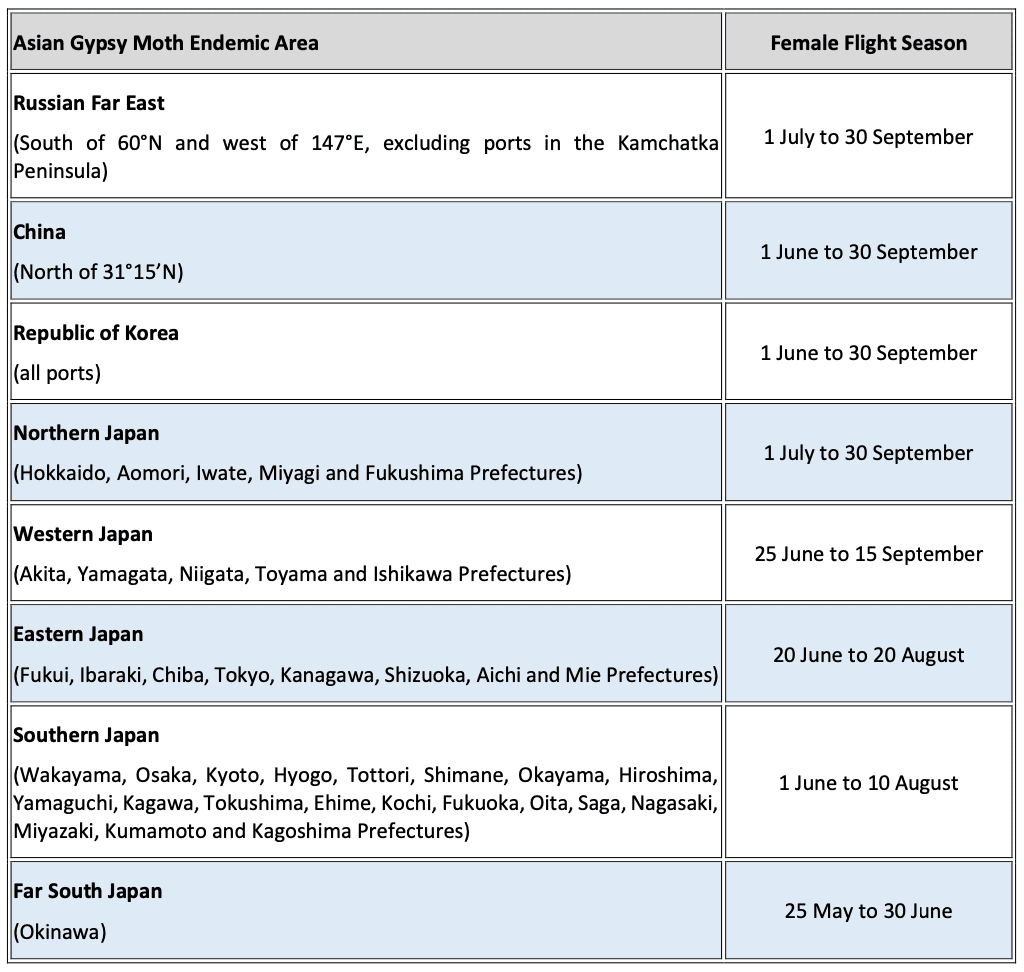 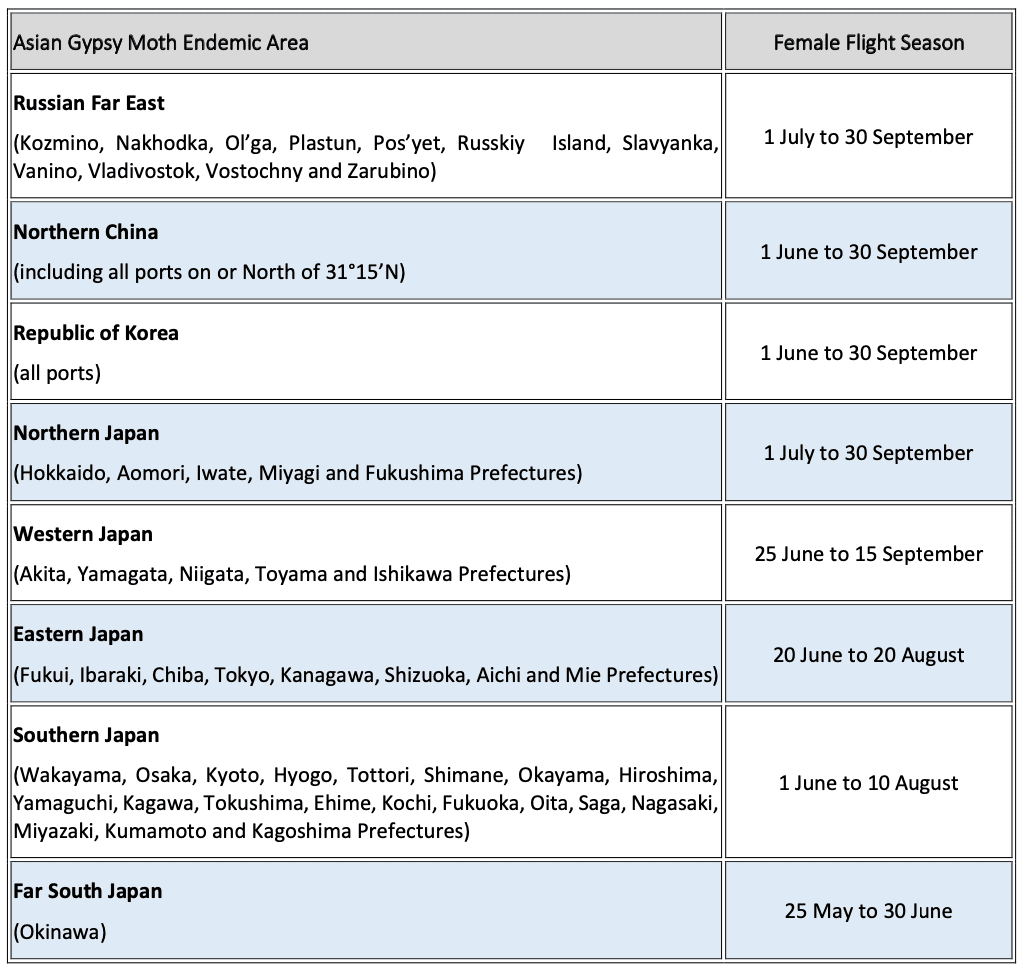 It is unlikely that a vessel will encounter live AGMs during ocean transit, whereas finding egg masses is the most likely occurrence to be experienced.

Female AGMs are active flyers and are attracted to bright lights; therefore, it will be common to find their eggs in the vicinity of exterior lights and floodlights on vessels. If powerful shore lights are being directed towards the vessel, finding eggs all over the ship and its cargo is highly possible. Subsequently, to mitigate exposure, non-essential external lights on vessels should be switched off where it is safe and practicable to do so.

AGM eggs are velvety in texture and range in colour from light tan to dark brown. A typical cluster will measure approximately 20 mm by 40 mm and contain between 500 and 1000 individual eggs. The eggs are exceptionally hardy and resistant to changes in temperature and moisture. They are typically deposited in sheltered locations, for example, under canvas covers, around light fixtures and underneath framing arrangements such as hatch coamings and the underside of bridge wings. Additionally, finding egg masses mooring lines and the outside surfaces of shipping containers and vehicles, such as within wheel arches, is not uncommon.

The larvae typically hatch in early spring, and this is considered the high-risk period in countries that wish to stop this species from becoming established. Consequently, vessels that call in Asia or Russia during the flight season and then subsequently arrive in port during the hatching period are of particular concern.

Mornings are the peak period for egg hatching and disbursement of the larvae. They move towards vertical structures, climb rapidly to a high point and are then widely dispersed on silken strands by the wind until they find suitable host trees to feed on, a process known as "Ballooning".

The inspection of vessels for the presence of egg masses, their removal and disposal are the principal tools in preventing AGM from becoming established in new regions.

"Some destination countries require vessels with calls to high-risk countries during the flight season to be inspected and certified free of AGM by a nominated authority immediately before departure".

Should there be no signs of AGM infestation found, the nominated authority will issue the vessel with a certificate stating that it is free of AGMs. The certificate may be a "Certificate of Inspection of Freedom from the Asian Gypsy Moth" or a "Phytosanitary Certificate" depending on the issuing authority.

Regardless of any official inspection requirement to mitigate the risk of infestation when calling at ports in the high-risk area during the AGM flight season, it is recommended as a minimum that vessels conduct the following:

When proceeding to any of the following countries after having visited the high-risk area during the female flight season, there are specific requirements that must be complied:

The Argentinian National Service for Health and Agrifood Quality (SENASA) have finalised approval and issuance of a resolution that established national AGM control measures.

SENASA produced the resolution 764/2020 on the 14 October 2020. These control measures have been in implementation since 12 April 2021, with the details found here. Resolution 764/2020 has two annexes, the first one has a specified certificate form, and the second contains the AGM regulated areas and specific risk periods.

The Department of Agriculture and Water Resources latest requirements are in Industry Advice Notice: 08-2021 – Commencement of Asian Gypsy Moth Vessel Assessment and Inspection Arrangements of 22 January 2021.

All relevant vessels will be sent an AGM questionnaire through the Maritime Arrivals Reporting System (MARS) as part of their Pre-Arrival Reporting (PAR) process.

The 2015 amendment makes the AGM requirements apply to all of China north of 20°N (not north of 31°15'N, as per the requirements of other countries with measures to stop the introduction of AGM).

The Club has seen this interpretation of the requirements by the Chilean SAG (Agriculture and Livestock Service), with a vessel which had called at a port in southern China during the flight season required to produce a phytosanitary certificate. 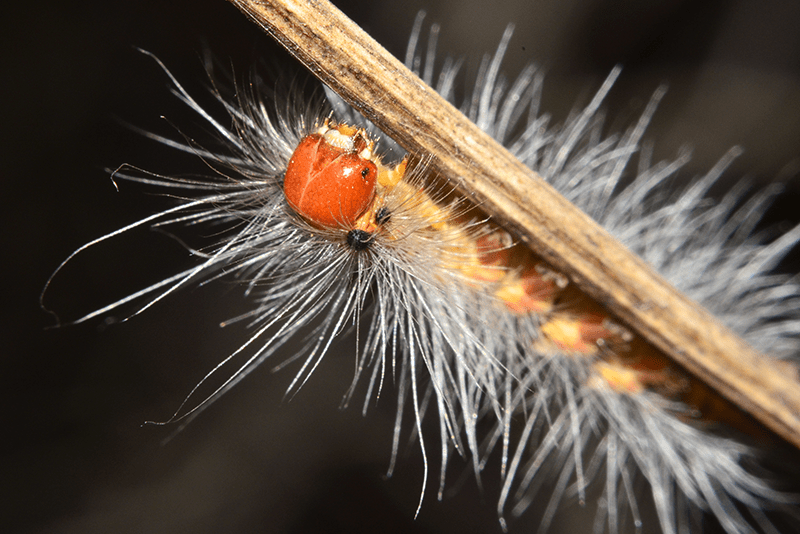 AGM requirements are in part 3 of the Craft Risk Management Standard (CRMS) - Vessels. Further details can be found in the Guidance Document to the CRMS for Vessels and on the following Biosecurity New Zealand webpage, which includes a link to a list of approved AGM inspection bodies: Hitchhiker pests.

The Ministry for Primary Industries has also published a Fact Sheet to assist Owners and Operators of Commercial Vessels.

AGM requirements are in the joint Asian Gypsy Moth Notice of February 2021 issued by the Canadian Food Inspection Agency (CFIA) and the United States Department of Agriculture (USDA). Specific country requirements can be seen in full here (for Canada) and here (for the USA).

Inspectors have found that in North American ports, there were a high number of AGM egg masses recorded in 2019 and 2020. Therefore, for 2021, the vessels must take extra vigilance in conducting self-inspections and receiving the required certification in AGM regulated areas.

When negotiating charter parties, Members may wish to include the following clause if the vessel could be required to call at ports in the high-risk region during the flight period:

“Should Charterers order the vessel to a port, place, country or area infested by Asian Gypsy Moth ("AGM") or where there is a risk of exposure to infestation by AGM as reasonably determined by the Master, Charterers shall take all reasonable steps at their time and expense to ensure that the vessel does not become infested. Without prejudice to this obligation, Charterers shall, at their time and expense, arrange for the appropriate certificate stating that the vessel is free from infestation by AGM, its larvae or eggs to be issued by an appropriate and recognised authority to the satisfaction of the Master just before departure from the last port of call within the high-risk area during the flight season. Notwithstanding the issuing of such a certificate, Charterers will be responsible for any consequences whatsoever, including but not limited to time, costs and third party liabilities to cargo interests etc., howsoever arising, and the vessel to remain on hire/laytime to count (as applicable) should an infestation of AGM be found or suspected and should delays or costs be incurred due to charterers having ordered the vessel to call at a port, place, country or area where the presence of AGM is known or suspected.”

Additional information on the AGM can be found in the: Gypsy Moth Inspectional Pocket Guide.