Instances of vessels being fined and detained in Turkish waters for pollution by substances other than oil are regularly encountered by the Club. Section 8 of the Turkish Environmental Code 1983 states (in part) that:

“It is prohibited, to introduce into, store in, transport to or remove from the receptor area any discharge or waste in such a way as to inflict damage on the environment or in a way directly or indirectly in contradiction with the standards and methods specified in the pertinent regulations, or to engage in similar activities”.

This provision is widely interpreted and rigorously enforced, to the extent that vessels have even been fined for pumping out clean ballast water. Ships at anchor off Istanbul are monitored particularly closely.

Fines are imposed in accordance with a published tariff, shown below, which is revised annually. The amount of the fine is determined by the size of the vessel and the type of pollutant, rather than the quantity of pollutant alleged to have been discharged.  In almost all cases the fine must be paid in cash. The fine may be reduced by 25% if settled immediately to allow the vessel to sail. Payment of the fine is not considered an admission of liability, and an appeal may still subsequently be lodged.

A Club Letter of Undertaking (LOU) may be used to release a vessel, however, the Turkish authorities require the original LOU as well as a notarised translation, the provision of which may delay the vessel further. The current exchange rate is approximately 3.00 Turkish Lira (TRY) to the USD. 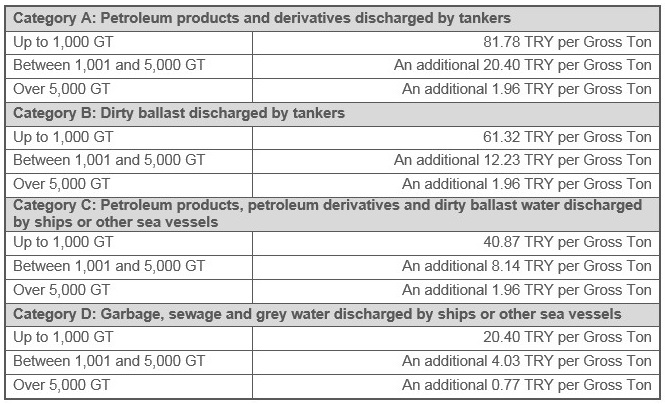 A second or third offence in a three year period results in the fine being doubled or tripled respectively. In the case of dangerous goods, the fine is calculated by multiplying the applicable Category C rate by ten.

In the event of a vessel being fined and detained for an alleged pollution incident in Turkish waters, the local P&I correspondent should be contacted immediately for assistance. It is important to note that the authorities do not need to substantiate their allegations and it is up to the ship to prove otherwise, making pollution fines in Turkey very difficult to challenge.

Shipowners may appeal to the Administrative Court within 30 days of a fine being notified, although appealing the fine will not release the vessel and the chances of success are very limited. Providing the authorities with evidence of best practice and comprehensive prevention measures will not mitigate a fine, even if the vessel maintains that another ship was responsible.  In such cases photographic or video evidence taken at the time of the incident might help, but this is by no means certain.

If a vessel is under repair in a Turkish shipyard or dry dock and pollution is caused by the negligence of the shipyard’s employees or agents, the ship may still be fined. In the event of such a pollution incident occurring a Letter of Protest should immediately be issued to the shipyard.

Due to the difficulties of defending allegations of pollution in Turkish waters, vessels should implement suitable measures to minimise the possibility of fines being imposed, and the following recommendations should be considered: