Inadvertent Release of a Freefall Lifeboat

The Australian Transport Safety Bureau (ATSB) has recently published a preliminary report regarding the inadvertent launch of a freefall lifeboat from a geared handymax bulk carrier while on a ballast passage in the Indian Ocean.

In the previous port the Second Engineer became concerned that the hydraulic hook release system of the freefall lifeboat was losing oil and topped it up. A few days later, after the Third Engineer and supernumerary Chief Engineer had completed their weekly lifeboat safety checks and returned to the embarkation deck, the Second Engineer entered the lifeboat once more to re-examine the hydraulic hook release system. He found that the oil level had fallen again and also noticed an oil sheen around the main hydraulic hand pump. After adding more oil and with no obvious source of the leak, he decided
to pressurise the hydraulic system by operating the hand pump lever so that any outflow could be traced more easily. After leaning across the coxswain’s seat and operating the pump lever a few times, the hook suddenly released and the boat rolled down the davit and over the stern. When the lifeboat started to move the Second Engineer realised what was happening and managed to sit in a seat, but he was unable to secure the seatbelt before the boat hit the water. The vessel turned back after other engineering staff present on the embarkation deck raised the alarm, and the lifeboat was eventually retrieved. As a result of the accidental launch, the Second Engineer sustained a fractured knee requiring medical treatment ashore and he was subsequently repatriated. 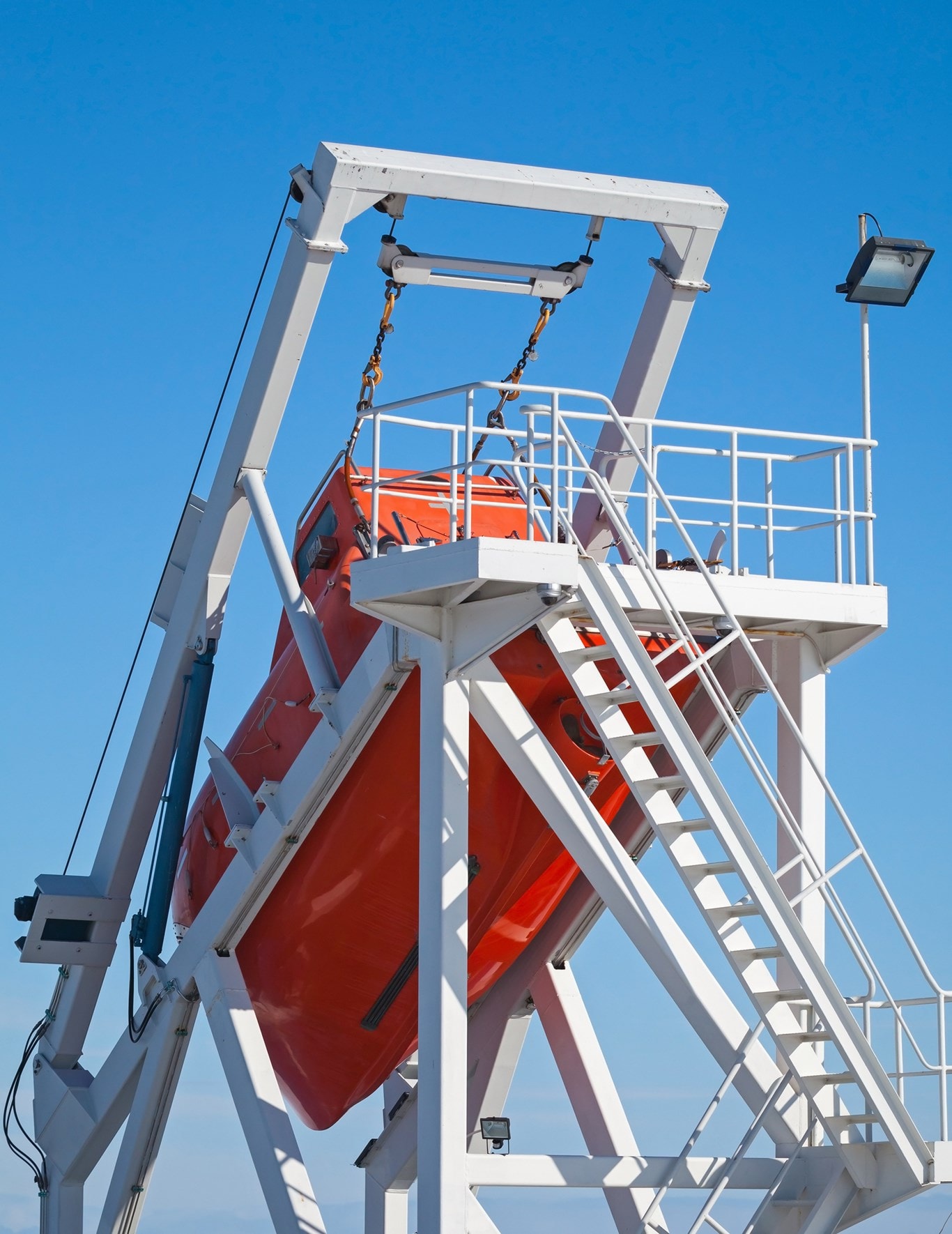 The freefall lifeboat was secured in the davit by a hook fitted to its stern. The hook was attached to the end of three long links which were fastened to a strong point on the vessel. Releasing the hook and launching the lifeboat involved operating the lever of the hydraulic hand pump situated inside the boat which activated a hydraulic ram. The hydraulic ram, via a link, rotated a cam which released a stopper block, allowing the hook to rotate and disengage the links (see picture). For the hook to detach, and on the assumption that the hydraulic ram would always be fully retracted, the manufacturer’s manual advised that the hand pump lever would need to be operated approximately ten to twelve times. However, the ATSB’s preliminary investigation found that it was possible to reset the hook and stopper block arrangement when the hydraulic ram was partly extended, thereby requiring fewer movements of the hand pump to trigger the release mechanism. The Second Engineer estimated he had pumped the lever only three or four times before the hook disengaged.
The lifeboat was fitted with short simulation wires leading from each quarter to securing points on the vessel. The wires were designed to facilitate simulated launches, bringing the lifeboat to a stop after it had moved a short distance down the trackway. The vessel’s procedures required the simulation wires to be connected whenever anyone entered the lifeboat for routine purposes, and these arrangements were in place at the time of the Second Engineer’s inspection. However, both simulation wires failed when the lifeboat was accidentally released. The ATSB’s preliminary findings indicated that the wires parted before they reached their Safe Working Load (SWL) but the reasons have not been published at this stage.
The release mechanism was fitted with a pin which passed through the hook and its adjacent cheek plates to prevent it from tripping. It was necessary to remove the pin in order to enter the lifeboat. However, since the pin was attached by a lanyard to the access door, it could not be re-inserted once personnel were inside. 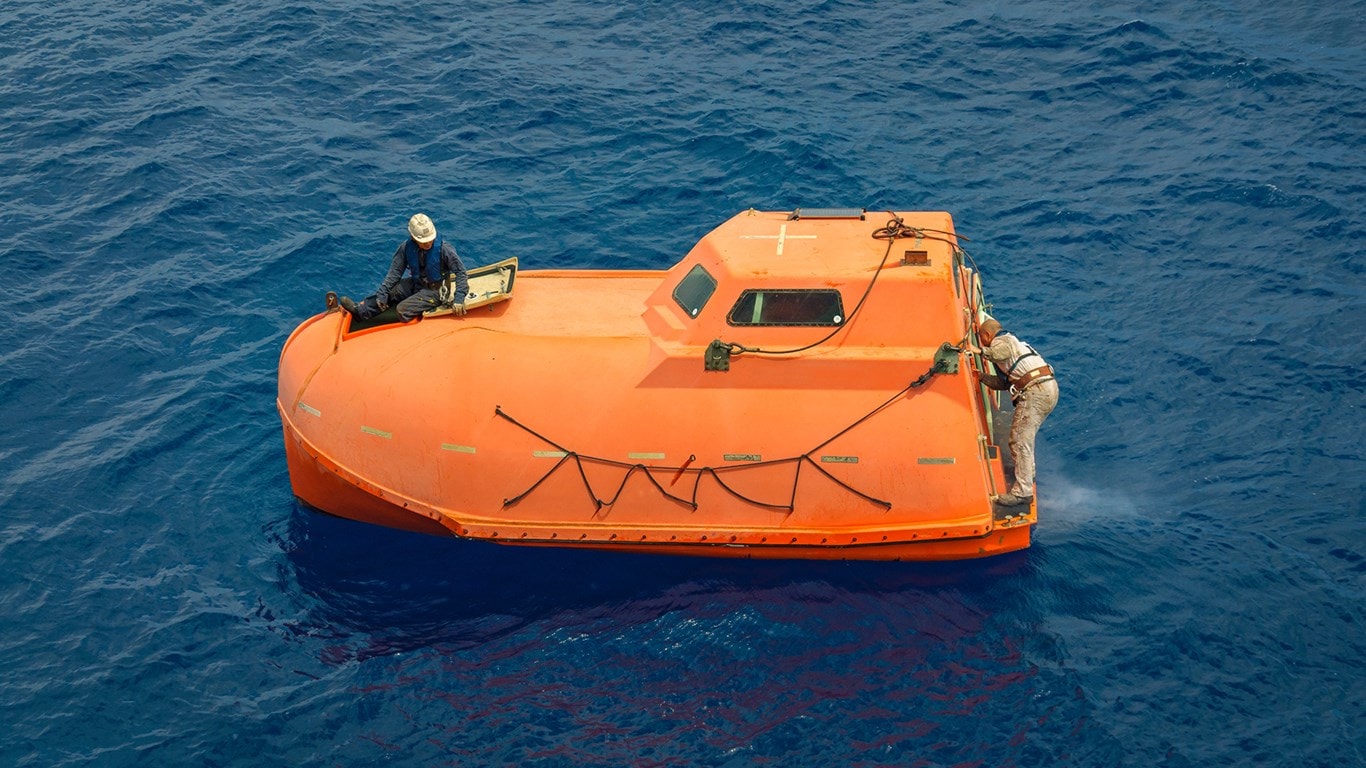 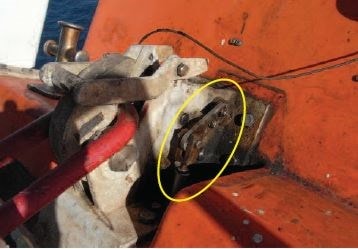 The vessel was fitted with a 27 person freefall lifeboat (JY-FN-5.8 type), davit (JYF55 type) and hook and release mechanism (model JX-4) all manufactured by Jiangsu Jiaoyan Marine Equipment Company. Vessels having the same or similar lifeboats or equipment are advised to ensure that the hydraulic ram is pushed back fully into its housing when resetting the hook following release. Marking the mechanism to indicate when the hydraulic ram has been reset correctly or adding other visual indicators may also be considered.

2. Unauthorised use of the hand pump:

The lever of the hydraulic hand pump should never be operated unless launching the lifeboat or as part of a controlled test of the release mechanism, both of which should be authorised by the Master beforehand. Appropriate warning notices should be placed alongside each pump lever.

If it is necessary to remove the antitripping pin fitted to the release hook in order to enter the lifeboat, and the arrangement prevents the pin being refitted once the lifeboat door is open, then a spare pin should be available and fitted to the hook to prevent inadvertent release.

Checks should be made to verify that simulation wires and associated fittings meet or exceed the requirements of the lifeboat and davit manufacturers in terms of SWL, size, type and construction, were sourced from a reputable supplier and are properly certified. The inspection and maintenance of such wires should be included in the vessel’s Planned Maintenance System (PMS), replacing them as necessary in accordance with the company’s wire replacement and discard criteria.

Personnel intending to inspect or maintain a lifeboat should always inform the duty watchkeeping officer of their plans. Ideally a tool box talk or job safety analysis should be carried out beforehand.

Members requiring further guidance should contact the Loss Prevention department.
This Safety Alert is based on a preliminary report into the Unintentional release of the freefall lifeboat from the bulk carrier Aquarosa
published
by the Australian Transport Safety Bureau
. It is important to note that the ATSB’s final report may contain findings and recommendations which differ from those in the preliminary report and in this Safety Alert.
Share this