Correspondents Cave y Compania Ltda, Valparaiso have advised the Club that the Chilean Agricultural and Livestock Service (Servicio Agrícola Y Ganadero – SAG) has introduced legislation requiring vessels to be in possession of a phytosanitary certificate if they call one or more ports at Chile after visiting an area where the Asian Gypsy Moth is endemic during the female flight season. The new requirements will enter into force on 12 February 2014. 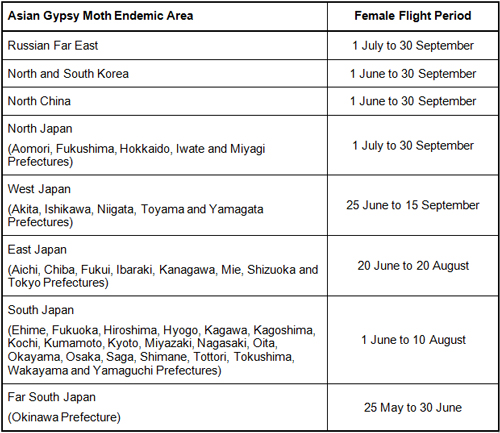 Phytosanitary certificates will only be accepted if they are written in English or Spanish and contain the following statement: “The vessel (vessel’s name) was inspected and is considered to be free of AGM.”

Vessels arriving from an area where Asian Gypsy Moth is endemic will also be required to provide the SAG with either a copy of the ship’s logbook or a list of all ports of call for the previous two years. This information is to be provided to the SAG by the vessel’s local agent at least 24 hours before arrival at the first Chilean port.

If a vessel arrives in Chile without the necessary phytosanitary certificate, or the certificate does not meet the requirements of the SAG, the vessel will be inspected on arrival. Such an inspection must take place in daylight and free pratique may not be granted until completed.

Although vessels do not need to obtain a phytosanitary certificate if they visit an Asian Gypsy Moth affected area outside the female flight period, the SAG may carry out random inspections of such ships for up to two years afterwards.

Vessels which do not comply with the new regulations may also be fined in accordance with Decree Law No. 3.557 of 1980 of the Agricultural Protection and Organic Law No. 18.755.