The Paraná River is an essential link in the logistical chain of South America, and for many, it’s their only means to drinking water. Following years of below-average rainfall and effects of deforestation in water catchment areas, the Paraná is getting parched.

This year has seen a series of extreme weather events, including snowstorms in Texas, a heat dome in the American northwest, record temperatures in Moscow, melting of the Russian permafrost followed by uncontrolled fires, exceptional floods in Germany, China, Greece and Australia, amongst others and tropical storms of unprecedented ferocity. All these events may seem localised with their effect passing relatively quickly; however, one climate-related occurrence is happening now that could directly impact shipping and global commodity prices.

The Parana River in South America is a network of rivers and waterways that stretches over 4,880 km linking Argentina, Paraguay, Bolivia, Uruguay and Brazil and eventually feeding the River Plate estuary. The river is the second-longest in South America, and 40 million people are dependent on it for their drinking water supplies. In addition, it is a significant source of water for irrigation and industry. According to the World Bank, the river carries around 75% of Argentina’s merchandise trade, including soya exports and other agriproducts. Thus, it is an essential link in the logistical chain for imports sustaining industry. The river also carries exports of Bolivian iron ore and agricultural products from Brazil. Additionally, it is a crucial link to the outside world for trade and sustains the economies of landlocked Paraguay and Bolivia.

The largest catchment area for water that feeds the Parana in southern Brazil has seen three years of below-average rainfall. Some forecasters are predicting that this period of low rainfall will last well into 2022. Further to the low rainfall has been the effect of deforestation in water catchment areas plus a shrinking of Brazil’s Pantanal, one of the world’s most extensive wetlands, which has reportedly lost 74% of its water surface area since 1985 and 71% since 1991. The Pantanal is a significant source of water draining into the Paraguay River, the largest tributary of the Parana.

This prolonged drought has seen water Parana River levels fall to their lowest level since 1944. As a result, the average flow rate of the river has fallen from 17,000 to 6,000 cubic metres per second, which has resulted in a drop of 50% in the hydroelectricity generated by the Itaipu & Yacycreta dams between Paraguay and Brazil and may result in energy rationing in Brazil. In addition, Brazilian infrastructure Minister Tarcisio de Freitas reportedly said that redirecting water for power generation will disrupt navigation on the Tiete-Parana waterway, the country's fourth-largest waterway for cargo transport.

Above the ports of Rosario and Sante Fe, the river’s traffic is dominated by tug and barge convoys. Convoys maybe five units wide and five-plus long, pushed by a single tug with the barges connected in blocks via cables. It is not uncommon at night or in navigation pauses for the crew to tie these barge blocks to the largest trees on the riverbank. During wetter times when the river was flowing normally, breakaways from these informal mooring arrangements were not unusual, with blocks of barges swept downriver colliding with vessels, other barges and hitting docks. Now with the falling river levels, barges may be stranded high and dry. In addition, grounded barges carrying containers have proved particularly difficult to salvage due to the inability to bring cranes close enough to lighten by lifting boxes off.

With falling water levels on the upper reaches of the waterways, operators have to utilise smaller barges with reduced draughts. This change is particularly damaging to the cost of transport to/from Paraguay and Bolivia. Additionally, barges are reportedly trapped in upper river waterways by lack of water depth caused by the drought and the waters being held back by dams to ensure electricity supplies. Even controlled releases of water from the dams have only had a marginal effect on navigation.

One of the great advantages of Argentina as an exporter of grains has been the ability to load directly into ocean vessels at Rio Parana ports, unlike major market competitors where grains must be trucked or railroaded over long distances to loading ports.

The very low water levels have had a significant effect on shipping. Bulk carriers that are sailing from the largest loading port, Rosario, are having to sail with 18% to 25% less cargo, according to Argentina’s Chamber of Port and Maritime Activities. As a result, vessels are sailing with 5,000 to 7,000 less cargo to pass through the ever more restrictive channels leading to the build-up of stocks in terminals. In addition, the logistics costs are rising as it is now necessary to truck cargo to the Atlantic ports of Bahia Blanca and Necochea, where vessels can be topped up.

"The logistical cost to the industry could be between $250 and $300 million, but that is a rough estimate. It all depends on how the river level evolves, but the forecasts are not encouraging," said Alfredo Sese, technical secretary at the Rosario grains exchange. 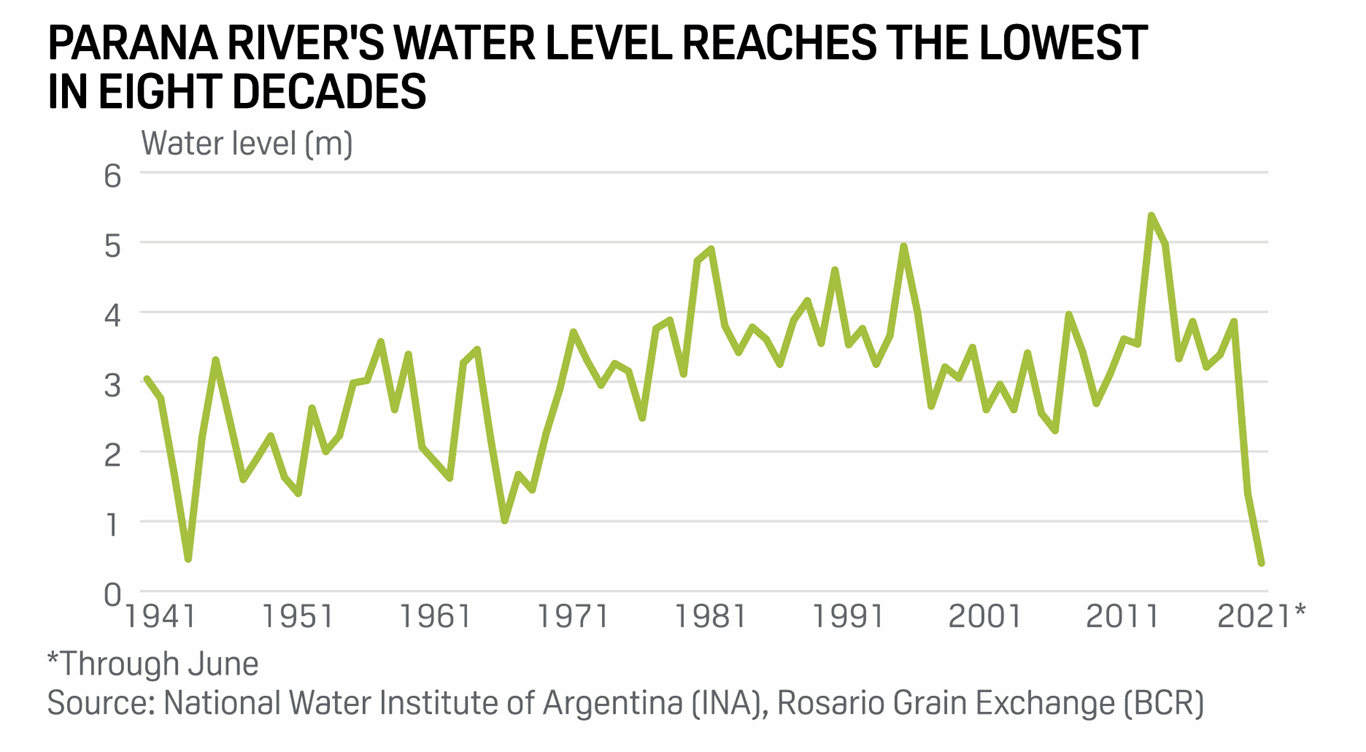 The Parana River has always been difficult to navigate safely with constantly shifting channels, mud & sandbanks, swirling currents and channel buoys being out of position. Measuring water depths under keel by echo sounder has not always proven accurate due to the unusual nature of the river flow and the high content of mud sitting as semi-liquid sediment or suspended in the lower water column. There is a real practical difficulty in establishing the navigable limit of water and where water with a high mud content ends, and non-navigable soft mud riverbed starts. This affects the vessel's trim and draught due to shallow water squat and manoeuvrability, increasing response time to rudder orders. Despite the considerable knowledge and skills of the river pilots, groundings are all too frequent. With the reduced water levels, the changing hydrography of the river is harder to predict, and the risk of grounding is even greater. The pilots are there to assist vessels’ Masters with their expert knowledge of the hydrography of the river channels. Still, it is essential that vessel’s crews fully understand the effect of shallow water on their vessel’s manoeuvrability and are ready to intervene to ensure that rudder changes are carried out promptly.

When a vessel grounds, there is a high probability that the navigation channel may become obstructed due to its narrowness. In such a case, the Argentine coastguard will determine whether a suspension of navigation is required until the vessel is refloated – which may take days or weeks. With water levels continuing to fall, groundings may become harder to refloat and with reduced channel width and depth resections, the probability of suspension of navigation increases. This can have a severe knock-on effect on other vessels encountering unforeseen delays.

The Club issued a warning about low water levels in June 2020 – Argentina Parana River Groundings, which contained practical advice which is even more critical today as water levels continue to fall. 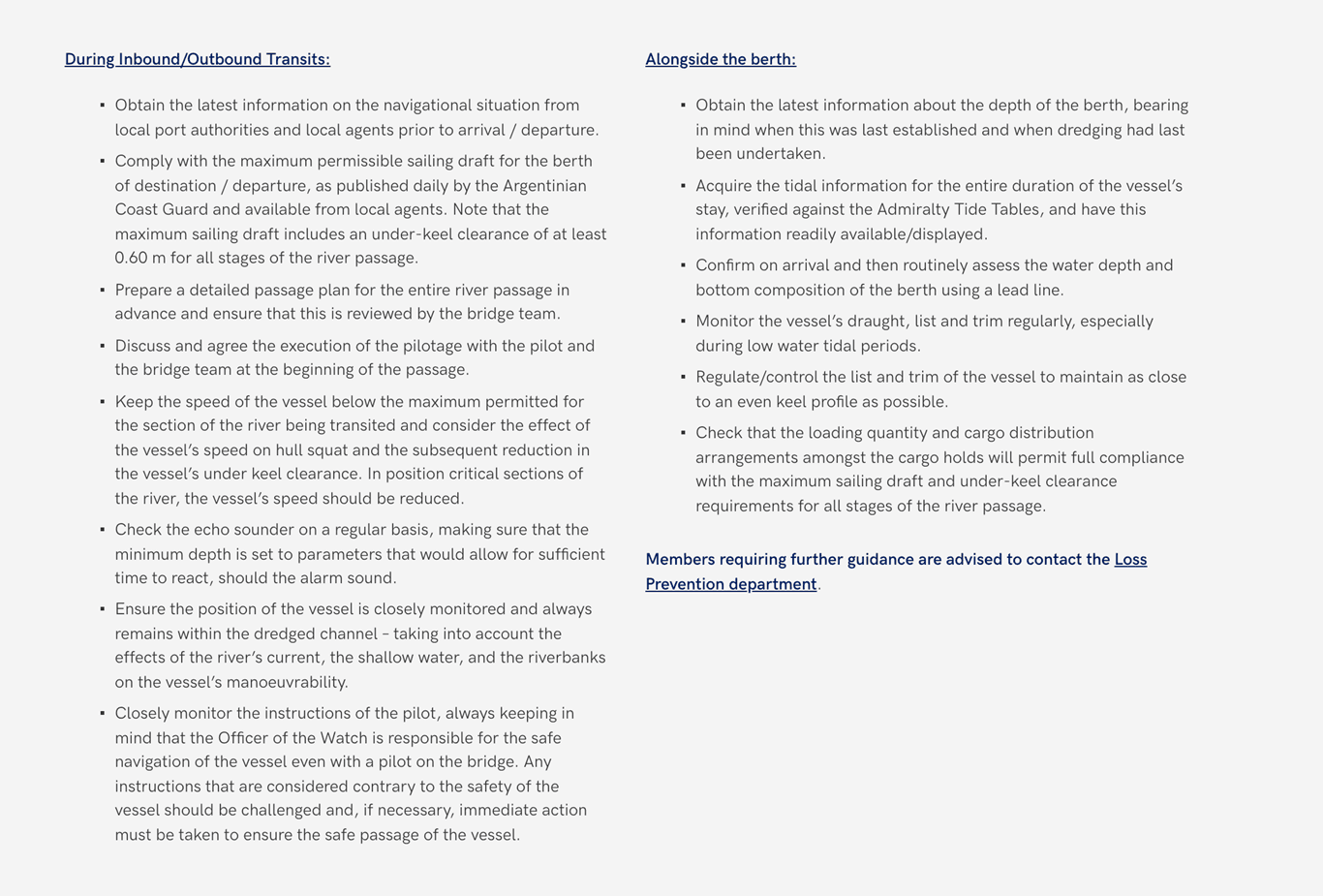 A further potential problem for ocean-going vessels created by the lesser load quantities of grain products in upriver ports with a topping up at Atlantic ports is their ability to fulfil the stability requirements under the IMO International Code for the Safe Carriage of Grain in Bulk. The Code stipulates a minimum reserve stability that would normally mean only one or a maximum of two partially filled cargo holds is usually permitted under the vessel’s stability manual for carrying grain in bulk. Although there are exemptions within the Code under Part A Section 5 - Exemptions for certain voyages, a vessel's transit to these topping up ports may require the undertaking of a passage outside the remit of a sheltered nature.

The falling water levels in the Parana River directly affect the cost of upper river traffic and ocean shipping. The inability to load full cargo at traditional river ports, the need for River Plate topping up operations, and delays caused by groundings effects overall trade economics. This is particularly important for owners and charters when agreeing on charter party terms and rates. In addition, groundings and consequential salvage operations and problems with collecting General Average contributions potential will seriously impact owners and charters claim records.

The effect of global warming on the weather systems of South America is having a direct influence on the economics of one of the world’s largest grain trades, and this may be just a first indication of future problems in other parts of the world and on inland waterways in particular.