Piracy on the Rise

Maritime piracy continues to be a major concern in many of the global shipping lanes, but this has now shifted to the Gulf of Guinea, South East Asia and most recently, the Gulf of Mexico.

Over past years, global locations where Maritime piracy has been prevalent have significantly evolved. Previously, the main areas of pirate activity were centred around the Indian Ocean/Arabian Sea, Gulf of Aden and Red Sea. However, with the implementation of the Maritime Security Transit Corridor in the (Gulf of Aden to the Red Sea) which is patrolled by the Combined Maritime Forces (CMF), piracy in the region has significantly decreased.

The CMF is a multinational naval partnership, which exists to promote security, stability and prosperity across approximately 3.2 million square miles of international waters, which encompass some of the world’s most important shipping lanes.

In November 2019, a US-led coalition created to secure shipping lanes in the Middle East was formally launched. The International Maritime Security Construct (IMSC) was launched in response to a series of attacks on vessels and onshore facilities that some coalition members blamed on Iran. The presence of the IMSC (formerly known as Operation Sentinel) further strengthens security and stability throughout the region protecting ships that transit the Persian Gulf, Gulf of Oman and the Bab el-Mandeb Strait. 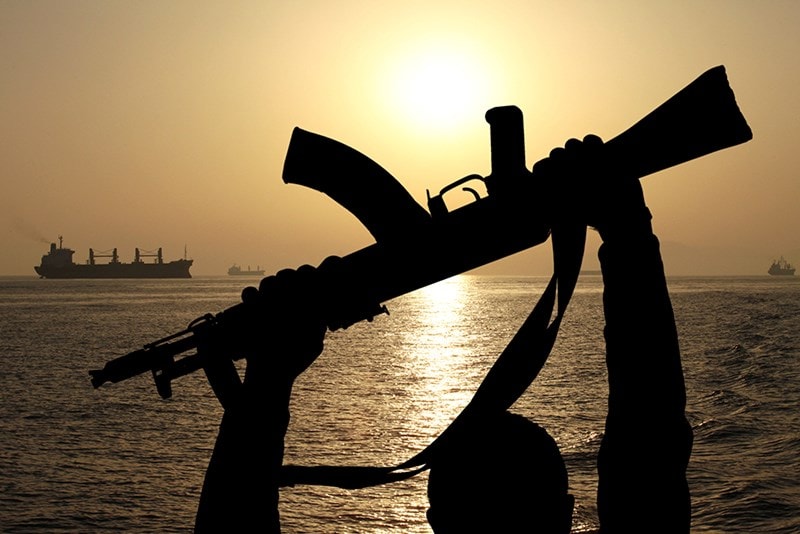 The United Kingdom Marine Trade Operations (UKMTO) is operated by the Royal Navy principally with the purpose of providing an information conduit between military which (includes/security forces) and the wider international maritime trade operating in the following High-Risk Areas (HRA): 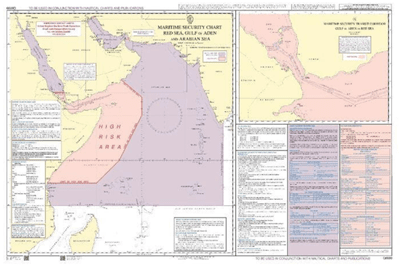 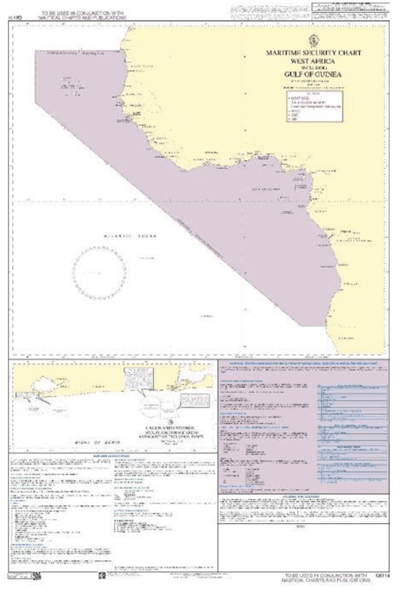 The VRA program is aimed to enhance the security of merchant vessels. Masters, Company Security Officers (CSOs) and Companies are encouraged to send regular reports, providing their position, course, speed and ETA at their next port whilst in transit. In the event of an incident, the UKMTO is able to inform the relevant regional authorities and warn vessels in the near vicinity of the incident.

The UKMTO also receives information from many other regional organisations which enhances Maritime Situational Awareness (MSA). Full contact details can be found on Admiralty Chart No Chart Q6099.

The Maritime Domain Awareness for Trade – Gulf of Guinea (MDAT-GoG) is a collaboration the Royal Navy (UKMTO) and the French Navy (MICA-Centre). In operation since the 20 June 2016, its primary objective is to maintain maritime situational awareness in the central and western African Maritime areas.

Full contact details can be found on Admiralty Chart No Chart Q6114. This will allow vessels to report their positions while transiting the revised Voluntary Reporting Area (VRA).

The Maritime Security Centre – Horn of Africa (MSC-HOA) is an initiative established by EU NAVFOR with close co-operation from industry. The MSC-HOA centre provides 24-hour manned monitoring of vessels transiting through the Gulf of Aden whilst the provision of an interactive website enables the Centre to communicate the latest anti-piracy guidance to industry and for Shipping Companies and operators to register their movements through the region.

The IMB Piracy Reporting Centre (IMB PRC) IMB Piracy Reporting Centre (IMB PRC) follows the definition of Piracy as laid down in Article 101 of the 1982 United Nations Convention on the Law of the Sea (UNCLOS) and Armed Robbery as laid down in Resolution A.1025 (26) adopted on 2 December 2009 at the 26th Assembly Session of the International Maritime Organisation (IMO).

The IMB also publish both current and historic details of piracy, armed robbery and stowaway incidents, including advice to Masters and piracy prone areas.

Established in 1992, IMB PRC offers a 24-hour and free service for shipmasters to report any piracy, armed robbery or stowaway incidents. Full contact details can be found on ICC-IMB Piracy Reporting Centre Website/Report an Incident.

The Maritime Global Security Website provides a wealth of information and links, with sections on Piracy, Cyber Security, Migration, Stowaways, Smuggling, Armed conflict and war. It has sections on specific geographic regions: Gulf of Guinea; South East Asia; Mediterranean; Red Sea, Gulf of Aden, Somali Basin, Arabian Sea. The website is maintained as a collaborative effort by some of the main shipping industry associations, these include:

Documents such as BMP5, BMP WA, Global Counter Piracy Guidance for Companies, Masters and Seafarers, a number of IMO circulars and guidelines and OCIMF Guidelines to Harden Vessels (First edition 2018). Use the filter to choose risk or geographic location.

The ReCAAP website contains a number of regional specific guidebooks that can be accessed free of charge from their website.

Thanks to the efforts of various nations and inter-governmental organisations, the deployment of naval vessels and surveillance aircraft has acted as a deterrent to piracy, particularly in the Red Sea. However, incidents in the Gulf of Guinea, South East Asia and most recently the Gulf of Mexico are increasing. There is also a growing trend of kidnapping of crew members for ransom.

The Club’s Position on the use of Armed Guards (PMSCs)

The Club’s takes the view that armed guards are an additional protective measure that owners may seek to deploy in addition to following industry security and anti-piracy guidelines, and the relevant edition of BMP guidelines, currently BMP 5 and BMP West Africa. Owners are expected to have carried out a full risk assessment for the intended voyage - taking into account the threat environment, the level of physical protection necessary for the vessel, voyage routing and the employment of additional security personnel - before considering the engagement of armed guards.

The employment of guards must always be legal and permitted by the vessel’s flag state. Owners must also ascertain whether armed guards are permitted on board vessels by the littoral states through whose territorial waters the vessel will sail. This is of particular importance where countries prohibit the presence of armed private security personnel on merchant vessels; some countries only allow local military personnel to provide armed security whether on board the merchant vessel or on escort vessels which often provided by local private security contractors.

When selecting a Private Maritime Security Company (PMSC), owners must carry out due diligence checks on the company, including asking for disclosure of their licenses to operate as an armed security provider and for the weapons they intend using. These licenses should include not only the corporate license but any licenses or permits issued by coastal states in whose territorial waters the guards may embark or disembark. There should also be a license for the actual weapons being used, showing the individual weapon number against which the Master can physically check when the guards board the vessel. This is vital, since it is reported that certain PMSC are illegally hiring or loaning weapons which is a breach of the weapons licensing and their own operating license.

In certain countries only local nationals are allowed to act as armed security personnel, usually from that country’s armed services. These personnel are often engaged through an international PMSC. There should be full disclosure of the identity of their local partner/sub-contractor and proof of a contract or operating agreement between the local sub-contractor and the military service providing the guards. This is important, to ensure that the services are being provided within the scope of local law and to assist in protecting owners under applicable Anti- Bribery and Corrupt Foreign Practices legislation.

Owners should only contract on the BIMCO GUARDCON form or the amended GUARDCON contract where the PMSC is acting as an intermediary for the employment of local security personnel within territorial waters.

It is important to ensure that there are no material amendments to the standard form contract that might affect Club cover and in particular attention should be paid to Clause 7 Owner’s Obligations and Responsibilities, Clause 8 Master’s Authority, Division of Responsibilities and Hijacking, Clause 12 Insurance Policies and Clause 15 Liabilities and Indemnities

It is very important that owners verify the PMSC’s liability policy to ensure that it extends to the contractual indemnities under the Clause 15 (b) knock for knock provisions. A policy that merely covers the PMSC’s legal liabilities is probably not adequate as the obligations to indemnify in GUARDCON are contractual.

The GUARDCON contract should be signed on behalf of the actual owners of the vessel even if the fees are being paid by charterers - it is essential that there is a direct contractual relationship between the owners and the PMSC as the owners are legally responsible for the presence of the guards on their vessel. If the PMSC has been selected by charterers this does not relieve owners of their responsibility to satisfy their due diligence obligations on the suitability and legality of the PMSC.

Owners should also check PMSC’ Standard Operating Procedures and the Rules for the Use of Force (RUF) which are in line with the BIMCO GURADCON guidelines. Where local security personnel from the military or police forces are providing the armed guards, they will be acting only under guidance from any civilian contractors and they will be acting in accordance with their statutory Rules of Engagement which may vary considerably from the BIMCO RUF Guidelines.

BIMCO have therefore developed GUARDCON for the employment of guards in the waters off East Africa with a view to this becoming the industry standard. However, as BIMCO does not consider that GUARDCON is an appropriate contract for the employment of guards on board ships in the Gulf of Guinea, the International Group has produced an amended version of GUARDCON called GUARDCON West Africa .

Further information and guidance can be obtained from the Club’s Loss prevention Department at lossprevention@westpandi.com
Share this